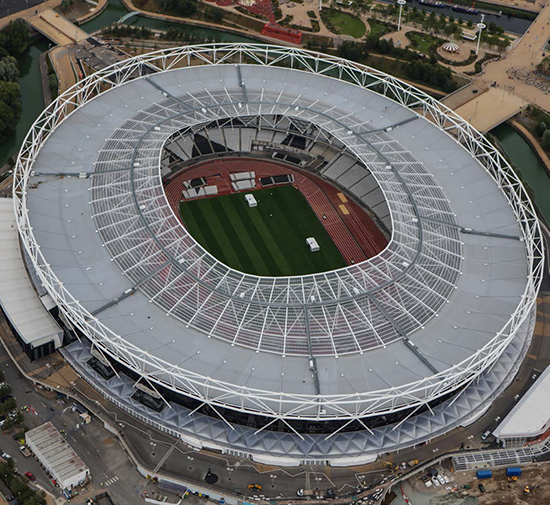 The conversion of the iconic London 2012 Olympic Games Stadium into a world class sports venue and premier league football stadium.

The London Legacy Development Cooperation delivered the Queen Elizabeth Olympic Park which hosted the London 2012 Olympic Games and is responsible for bringing it back in to use.

In 2010, five LABC teams from London Boroughs of Newham, Hackney, Waltham Forest, Tower Hamlets and Greenwich came together to form JLAB – a joint venture organisation which provided the building control service on the Queen Elizabeth Olympic Park. They were subsequently employed to help the project team convert other buildings on the site.

Contact us for guidance before you get on site...

The client wanted to create a building which surpassed Part L but they also wanted to retain the existing building services. The conversion included a new roof, a new perimeter wall, extensions to the hospitality areas, new flexible seating and an upgrade to the building fabric.

The original stadium had 25,000 permanent seats on the lower tier and 55,000 temporary seats on the upper tier. In the original brief the temporary seats were going to be removed along with the hospitality lounges but during construction it was decided that the building could become a sports venue rather than just a football stadium, so the brief changed. The stadium now has a state of the art, movable seating system which can be adjusted to suit each particular event. JLAB worked closely with the project team to ensure the new seating system was compliant with Part M.

JLAB worked closely with Populous, Balfour Beatty and other members of the project team providing early advice on fire, access and structure. Using their knowledge and experience gained by working on the original park they were able to help the design team find solutions and make decisions about the design and specification of the building. JLAB was an integral part of the design and construction team, attending weekly design team meetings and utilising the programme Tracker to access documents.

The most significant part of the conversion was the installation of the new roof which could offer protection from the elements, house the lighting system and provide acoustic solutions which capture the spectators’ cheers and send them around the stadium bowl. To accommodate the new roof, the existing structure had to be altered significantly, particularly around the compression ring at the top of the stadium and the project team worked collaboratively to identify how to strengthen the structure to meet requirements.

The new roof, which is supported by a cable net system, is one of the largest of its kind in Europe. The original stadium was an open structure within the Olympic Park so a wall had to be built to house exit gates, entry turnstiles, catering units and additional toilets and to make the stadium secure.

What did LABC add?

This was a complex, challenging and unprecedented conversion. Through collaboration and early engagement the project team was able to bring the stadium into use 10 months ahead of schedule. The early handover enabled the 2015 Rugby World Cup to be hosted there. A stadium which was designed to host the Olympics has been transformed to provide a first class multi-functional sports facility and a home for West Ham football club.

Planning a complex stadium or stadium or arena project? Find out how we can help