Day in the life of a building control surveyor: Fire in a former clog mill

During the evening of Thursday 1 August, a fire ignited in an empty building in in Mytholmroyd, Calderdale and by the early hours of Friday, it was clear that, despite the considerable efforts of West Yorkshire Fire and Rescue Service, the roofs and floors of the former Walkley's clog mill were burnt out making the tall walls unstable, dangerous and at considerable risk of collapse.

This historic factory (Walkley's began manufacturing clogs in 1870 and still do - although in a different place these days) is a long, four-storey mill that sits on a constricted triangular site parallel to the River Calder to the south:

To the north is the busy A646 Burnley Road and to the west is a small track providing access over the river to a variety of homes, businesses and a council depot. There are a group of buildings to the east close to Burnley Road.

During the fire-fighting operations, Burnley Road (the main arterial link between the Upper and Lower Valleys) had to be closed, severing road communications between Halifax, Sowerby Bridge and Mytholmroyd and the communities located beyond the fire in the Upper Valley – Hebden Bridge and Todmorden.

It became clear the dangerous state of the buildings would require emergency works, pulling down the perilous elements of the building in order to allow Burnley Road to be re-opened to traffic.

A dangerous structures notice was served upon the owners of the building, contractors were called and works commissioned to remove the dangerous, fire damaged elements.

Everyone worked tirelessly to ensure the safety and welfare of local people and visitors to our Borough.
Mike Terry, Head of Building Control Calderdale Borough Council

The immediate concerns were for public safety and the welfare of the demolition crew, but also as the on-site works carried on concerns grew over the social and economic impact of the closure of Burnley Road. So as soon as it was safe and thanks to the care and efforts of colleagues in the council’s highways team, the track over the river was re-opened to help residents and business.

The representatives of the owners together with their demolition contractor were encouraged to act safely but efficiently to remove the dangerous elements and permit Burnley Road to re-open as soon as possible.

An extra challenge for the teams on site was that weekend’s Hebden Bridge vehicle rally organised by the Rotary Club. Many people would use the Burnley Road from the east to arrive at the event or use the car parking available south of the river via the track to the west of the mill site.

There were setbacks and challenges – including a lost gas main and a large demolition plant vehicle getting stuck in the traffic light-controlled flood alleviation scheme! But team work, commitment and hard work resulted in the dangerous building being removed and Burnley Road being reopened by 6 a.m. on Saturday 3 August.

Mike Terry, Head of Building Control at Calderdale Borough Council said, "This was an extremely challenging project and a huge thank you goes to all involved for their efforts and hard work – and especially to all those colleagues from across Calderdale Council who displayed tenacity, commitment and care.

"Everyone worked tirelessly to ensure the safety and welfare of local people and visitors to our Borough. They kept people informed, engaged with the community and made sure vital highway links were restored quickly and safely."

No two days are the same in building control and if you're looking for a career where you can protect the public and indulge your interest in construction, then look no further than local authority building control. Visit our recruitment website for further information. 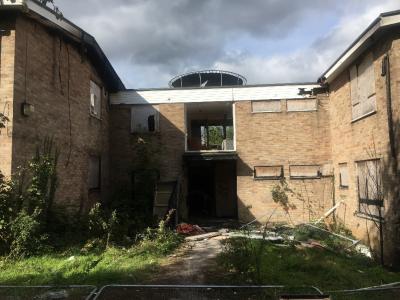 The fire extinguisher: 200 years and counting