A recent CROSS report from structural safety organisation SCOSS highlights the importance of regular maintenance checks, getting the drainage right and the correct design of flat roofs.

The report concerns the collapse of a roof at a 1960s school constructed with loadbearing masonry walls, a suspended concrete first floor, and a flat timber roof which had been re-covered in 2015. The roof comprised of new felt covering over insulation, above the old felt, and supported on woodwool boarding spanning between proprietary timber ply-box joists at approximately 1.2m centres.

There was a suspended plasterboard ceiling supported by a timber framework. The joists to the main roof had fractured at their midspan, damaging the end supports as they did so. At the time, substantial quantities of water were seen pouring out from the ground floor.

The section of roof in question was surrounded by a parapet with a hidden gutter at one end. This had leaves within it and there was debris and vegetation in the gutters and outlets to other roofs to the school.

It is likely that the outlet had become blocked and water had gradually filled the roof area without being noticed. 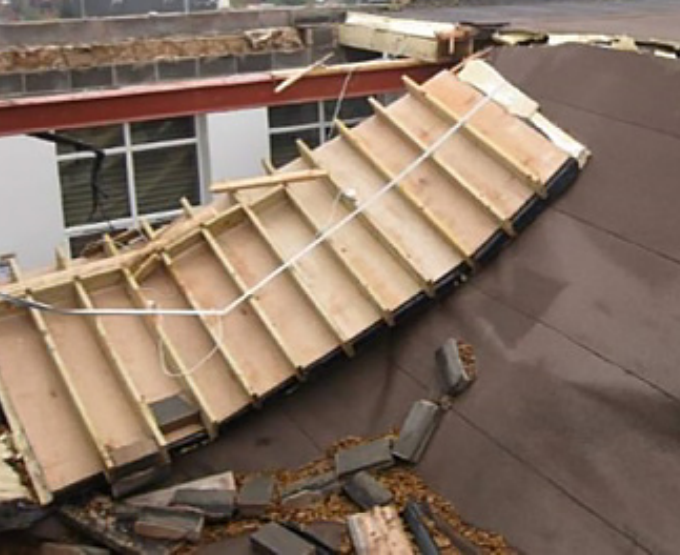 Current codes say that roofs with access for maintenance only are to be designed for an imposed loading of 0.6 kN/m2. It is considered that the dead load from both old and new coverings was within this allowance. However, if the area above the roof did fill with water, say to a depth of 250mm (the height of the upstand), there would be a sustained uniform loading of 2.5 kN/m2.

Furthermore, under this loading, there would be significant deflection allowing for a further increase in loading should the area continue to fill from rainwater.

The fact that it has been reported that so much water was seen passing out from the building suggests that the roof was holding a significant volume of water. Elsewhere, there is only a small upstand surrounding the roofs and there are openings at outlet positions allowing water to overflow should there be a blockage of the outlet. The same scenario is therefore unlikely to be able to occur on the other roofs to the school.

There have been a number of historical major collapses especially on timber roofs caused by drainage blocking / ponding and potential rot (e.g. Bad Reichenhall, Germany (2006)).

The hazard of 'drainage failure' is common. Standard building practice, as in routine domestic plumbing, ought to be deployed to highlight overflow before ponding or undetected leakage can occur.

The safety concept which has wide application is known as 'leak before break'. All structures are prone to degradation.

Proper management requires routine inspection to detect the onset of damage before this becomes hazardous.

This report demonstrates that when designing for structural safety, a holistic view of the design should be taken.

It may be that there were maintenance issues with blocked outlets, but this possibility should have been considered and suitable overflows provided. It seems to be yet another symptom of divided responsibilities on projects, with no overall view of the impacts of the building design on the structural response.

View and submit confidential reports on the SCOSS website.

View the latest SCOSS/CROSS newsletter that also includes a report on the consequences of low professional fees. 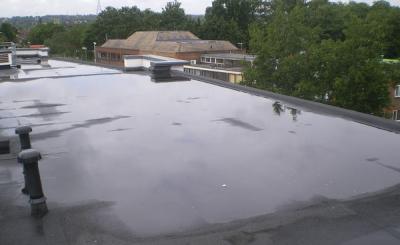 How to avoid defects claims on flat roofs 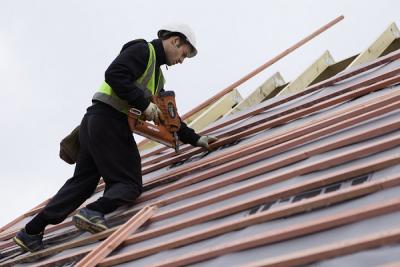 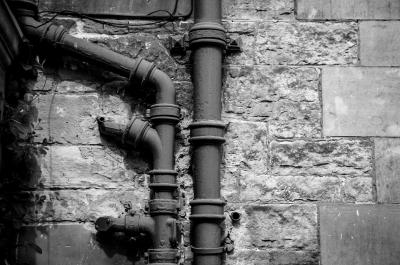 How to get it right: Above ground drainage

How to get it right: Drainage