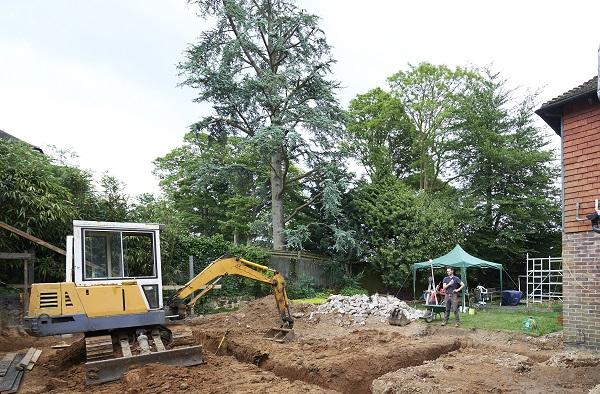 Take extra care when excavating foundations in clay soils, especially if there are trees nearby. Clay soils are made up of 40% water, but trees can change this amount differently throughout the year - causing the soil to shrink or swell with enough force to affect the foundations of a building and so it's vital that the foundation is the right depth to prevent movement.

You can tell if your soil is clay by giving it a squeeze - if it stays in the shape you've made with it and doesn't crumble, it's probably clay (but in very dry conditions even clay will crumble).

There are three types of clay in the UK, classified by their 'plasticity' (or how much they can change volume because of their water content):

Seasonal changes affect clay soils - causing them to swell in winter and shrink in summer. That's why there are minimum foundation depths for each type of clay. Strip, trench fill or pad foundations must be cast at a minimum of 750mm in low plasticity clays, 900mm in medium, and 1000mm in the highest risk areas.

The trouble with trees

But these minimum depths are not enough where there are trees. In drought trees will suck moisture from the clay, shrinking the soil and causing serious settlement and cracking in properties with shallow foundations. Cutting a nearby tree down won't help either.

In normal weather conditions clay adapts to the way nearby trees use water and maintains a steady amount - with the trees drawing out what they need. If you remove a mature tree, the clay won't be able to contain the excess water and will swell - sometimes with enough force to move foundations and lift concrete ground floors, causing serious structural damage.

So cut down the tree or leave it, you're snookered either way! The only answer is to form the foundation below the area affected by the trees.

A little known fact about building control surveyors in areas with shrinkable clay is that they're all tree experts - or at least they often have a 'book of trees' in the car. That's because the type of tree determines the depth of foundation - they all have different water demands. The worst culprits are very tall trees, such as Poplars and other large broad-leafed species.

If you have a 'high water demand' tree the effect on foundation depth can be huge - often needing trenches down to 3m deep, with additional precautions such as compressible boards for heave protection. So how can you determine the depth required?

Use the freely available LABC Warranty Foundation Depth Calculator, which covers the vast majority of trees found in the UK. All you have to do is enter the type of soil, type of tree, and the distance from the building and this online tool will show you the depth of foundation you need.

This is very handy when pricing a job as you can give a much better idea of the foundation costs to your customer beforehand.

Read our other articles about working with foundations

My house was here first. about 1880. In 1977 Sydney Council planted 2 trees just 3 feet from my wall. The trees are now huge with branches over the roof, two storeys up, and roots under the walls. The walls are cracking. Would replacing the trees with smaller trees help? What can be done?

My advice would be get rid of the trees totally. If you replace you will end up with the same problem in a few years. Without the trees the clay will not suffer from shrinkage as much and further cracking should stop. Get it sorted though as it will only get worse!

of course if you cut it down in one go you will potentially have the soil heaving as it suddenly becomes much wetter without the water being drawn up. This could cause more significant moving than you have seen thus far. safest approach would be to maintain trees at their current canopy level indefinitely. If you must cut down consider doing it in stages over say 5 years.

You would need to get a tree surgeon in the first instance and check with council if the trees don't have a preservation order on them.

It depends on the type of trees, both existing and proposed, together with ground conditions. We're probably too late, but we suggest that specialist advice and a site inspection will be necessary and may involve a building control surveyor and and a tree surgeon together, with a need to discuss the issue with the council.

How do ground conditions change the depth of your dig? Include example measurements in mm or inches where necessary. Please help me

The depth requirement will vary according to all the factors mentioned within the article together with other aspects such as the slope on the site, age of the tree(s) in question etc. For a site specific answer you need to speak to your local authority team who will be able to assist you with your application.

You can find out who they are by entering the site postcode on our front page https://www.labc.co.uk/

Sir,
I want to build a home at my site with cheap budget.My site is a feild and the water table is high if excavated at height of 1feet can find water.Is random rubble foundation good.
Please prefer me a suitable foundation at the cheapest.
Thank you.

If you have filled ground with a high water table then the words 'foundation' and 'cheap' almost certainly can't be used in the same sentence! It sounds like a raft or piled foundation might be the best solution but you should speak to your local authority building control team and engage a structural engineer to design the optimum foundation for your location and intended use. 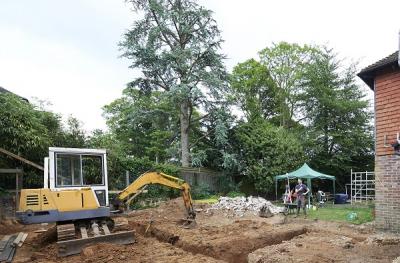